A poor man had reached almost his retirement age but havent achieved the wealth and success he had envisioned. Depressed but desperate to learn the secret of getting rich he decided to talk to his rich friend who also had started with him but had achieved lot more than him.what the secret of success was.
He started early the next morning to know the secret. The rich man understood his friends situation and decided to help him. But he also knew that nothing comes easy so he asked his poor friend to walk down the rough path near the edge of town. He convinced his friend that he will find the answer to his question by the end of the road. Trusting his friends words the poor man started walking down that rough path.
He walked and walked until his legs started paining. The path had some sharp turns over the low hills and was a complete mystery. He could never find a view which would show him the actual length of the road. The path was slippery and very rough. He stumbled over a few times and also hurt himself. But he was too desperate and so kept on walking. After almost exhausting his energy he saw a side board. On walking near he could read "Not far to go now". Encouraged by the words he again started walking with all his energy.
A little further he saw another sign that read: ‘Keep going.’ He felt a renewed sense of energy 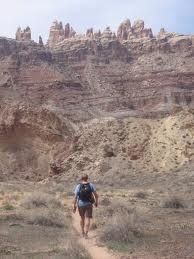 and determination even though he was hot and exhausted.

After walking some more he read another boardsaying "You are nearly there.". He was too exhausted so he decided to wait for some time and rest his muscles befire starting again.
He again started walking and a few more hours passed by. The sun had also started to set. With every step he experienced more and more discomfort and all his excitement had vanished. He started thinking that his rich friend had played a joke with him. There were only signs after signs but the road never appeared to have an end. A stream ran by, he sat down for some refreshment and thought. On thinking what his friend had done to him, He got frustrated and decided that there was nothing down the road. His friend had made a fool out of him. He decided to head back to his rich friend and give him a good thrashing for playing such a stupid and unworthy prank with him.
In the meantime the rich friend was sitting in his beautiful balcony watching the sun set and waiting eagerly for his friend to arrive. A cool glass of lemonade and a satisfactory smile on his face were searching the road for his friend.
He waited and waited, until eventually the sun set down. Disappointed, he walked across the lawn and up to the gate of his house. He opened it and walked down the rough path that ran near a little stream. He stopped at the sign he had erected there. The sign read: ‘You’re here.’
He gazed one last time down the long and winding path but there was no sign of his friend.

“Nothing in this world can take the place of persistence. Talent will not; nothing is more common than unsuccessful people with talent. Genius will not; unrewarded genius is almost a proverb. Education will not; the world is full of educated failures. Persistence and determination alone are omnipotent.“